When Ferndale Confectionery decided to put resources into an Asian expansion in late 2014, we had a simple set of objectives, that could be measured with a simple Yes or No answer. Ferndale’s main competitors are the billion dollar behemoths that dominate the shelves in most retail outlets across the globe- Mars Wrigley, Perfetti Van Melle, Mondelez and Ferrero. These outstanding confectioners continue to challenge Ferndale in every market, including China, so Ferndale’s goals must be clear, realistic and above all else, simple to evaluate.

I was well aware of the hundred’s of Australian businesses that had walked the same path into China prior to Ferndale, and I was also well aware of the risks associated with launching new, unknown brands into one of fastest changing, dynamic marketplaces on the planet. Ferndale, whilst excited, was (and still is) as equally cautious when making decisions that relate to our Chinese business. I am well aware, that one wrong move can spell disaster and bring undone years of hard work.

The management team knew, that the first thing we needed to do was to find a partner, with local market knowledge and the infrastructure in place to service such a vast marketplace. Ferndale is still a relatively small, family owned and operated Ballarat based business, so to try and enter China alone, would be flaunt with danger. Ferndale’s Export Department wasn’t what you would call ‘heavily resourced,’ nor did we have brand managers, channel managers or consumer insights to leverage off. Our Export Department was me, a 29 year old salesman, who prior to this push into China, thought Shanghai was the capital of China, and I certainly wasn’t well versed in the art of Chinese negotiations.  Our Export department has since doubled, to two.

A prospective partner needed to be someone who I could trust to represent our brands, with the same passion that Bruce (my father and Ferndale’s founder) and I do. A partner needed to be more than a simple buy-sell relationship; our new partner needed to become great friends and part of the Ferndale family. In mid 2015, Ferndale was contacted by an organisation based in Beijing, who became aware of our products when passing through Melbourne Airports International terminal, after visiting Australia on other business. (I still haven’t told my sales rep who manages Australian World of Chocolate account at the airport, but as a result of his distribution in this outlet, Ferndale’s future in Asia is very bright- Thanks Anthony).

The timing couldn’t have been any better, so I immediately jumped on a plane to China. One Tuesday afternoon I met a Chinese businessman by the name of Mr. Zou at the Victorian Governments office in Shanghai, followed by a feed of traditional dumplings. That meeting has revolutionized Ferndale, and our China business is in good hands. When Mr. Zou and his colleagues come to Australia, they stay at my house, as they are now part of the Ferndale family.

When I look back on the original objective of ‘find a partner in China’, I can simply answer ‘Yes’.

My second objective was ‘make every post a winner’. Ferndale is too small to fail, so we must approach every market differently, and tailor the approach. It is easy to get blinded by the bright lights of Nanjing Road, and get over-awed by some of the store numbers that China can throw at you, not to mention an e-commerce channel that is simply to big to describe in so few words. Our tactic was simple- we have time, so test, test and test some more. Don’t take the easy (and more expensive road in) and pay the listing fees to get the distribution, without actually having sold one unit. Retailers love that approach, they have a revolving door of cashed up executives looking for the quick ‘fix’. Quick fixes don’t exist in China (nor anywhere else for that matter), especially if you are an over-confident westerner, who says ‘these products are Australian, of course the Chinese will love them’. Don’t be so disrespectful.

We worked hard to get trials in big retailers, and Family Mart Shanghai obliged. They gave us 9 centimeters of shelf space in 54 stores for 12 weeks. Every confectioner on the planet wants a trial, so we were lucky, but clearly, something appealed to the buyer; maybe it was Mr. Zou, it certainly wasn’t anything I did! We decided that JILA was our hero, so let’s back it in.

After 9 weeks, JILA Sugar Free Peppermint Tins, became the number 1 selling product in the category. If i didn’t already love JILA, I did now. I don’t have kids yet, but I’m wondering if it would it be weird to call my first born daughter JILL? Maybe?

Three weeks after beginning the trial in Family Mart, we had an opportunity to list in 7-Eleven Beijing- 16 stores, 2 products. We took a punt on the relatively unknown JUNO Chewy Mints. They became the number 3 & 4 selling products in the category in the first 11 weeks. I’m happy with this, as I now feel challenged to become number 1.

Things were looking up, we now had two case studies, some real data and a factory in Ballarat operating at 40% capacity. These two posts were winners, among many others, but these two stood out. Reviewing back on objective number 2, ‘make every post a winner’, so far, I can answer ‘YES’.

My third objective was to achieve critical mass (5000+) distribution points, before implementing an online strategy.

In March 2017, this far stretched goal has become a near reality. Family Mart China has confirmed ranging on our Chewy Mints in 1500 stores- how could they ignore the trial outcome. Furthermore, All Days Convenience has ranged JILA Tins in 800 sites, and 7-Eleven has begun to roll out the range into there network across Northern China- they are yet to confirm a final store count, but we are up to 240 and counting. This immediate ‘mass’ bulks up the work that we have done in the smaller retail chains, and grocers- BHG, Jenny’s Lous, Wumart and other larger chains such as Yonghui.

By June 30, 2017 Ferndale products will be able to be purchased in approximately 4000 stores throughout China.

You so often read about the Blackmores, Swisse and Bellamy’s of the world, who have become famous in the local Daigou community. Those savy Chinese consumers who visit the local Chemist Warehouse to purchase goods to send back to family and friends in China. These brands are all now household names in China, and have a massive role to play for smaller organisations like Ferndale. They have put Australian products on the map.

My father always told me, selling confectionery is a walking game- you sell a box, walk to the next store and then sell another; the further you walk the more you sell. Whilst the e-commerce scene has transformed the way shoppers purchase goods, I still firmly believe that to build a brand, and create demand, it starts with bricks and mortar distribution. I like walking, especially in China. Once the consumer has tried the product, tasted the product and purchased it at there local 7-Eleven and Family Mart, maybe, just maybe they will just add it to there weekly dot com splurge. Who knows, maybe we will have to splurge also, and appoint a third member to Ferndale’s export department.

I hate littering, but whilst walking through Beijing and seeing an empty box of JILA in the gutter in a busy street, did bring a slight smile to my face.

We have a long way to go before we can say we have “Made It” in China, however, the foundations are firmly in place to begin the build. 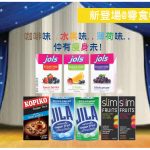 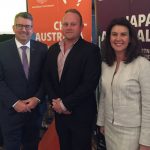